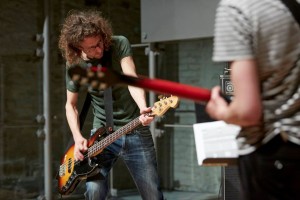 The Dutch band Julie Mittens are a hermetic experimental/freejazz/rock trio taking cues as equally from Japanese noise and free improv as from psychedelic rock and experimental blues, playing improvisations that are energetic, dynamic and intuitive. As The Wire’s David Keenan wrote, they are “still the greatest contemporary European guitar psych group”.

In 2012, Austrian composer Peter Ablinger wrote his ‘Black Series, 10 Stücke für Rock Band’ for Gareth Davis and the Julie Mittens, the first part of an ongoing venture working with and reinterpreting the works of composers including Alvin Lucier, Stockhausen, Elliott Sharp and James Tenney. “The result was this year’s most intriguing and succesful genre-crossing collaboration” wrote The Wire about the Ablinger world premiere. In 2013 the Julie Mittens and Gareth Davis recorded the ‘Black Series’ in the WDR radio studios, Cologne. In 2014 they premiered Slobodan Kajkut’s ‘Wien Burn’ as part of the OpenMusic festival in Graz.

Since 2012 the group are joined regularly by clarinetist Gareth Davis.