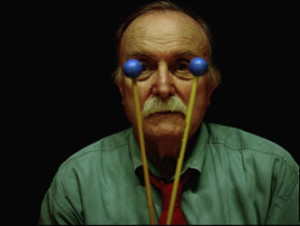 Alvin Lucier was born in 1931 in Nashua, New Hampshire. He attended Yale and Brandeis and spent two years in Rome on a Fulbright Scholarship. From 1962 to 1970 he taught at Brandeis, where he conducted the Brandeis University Chamber Chorus which devoted much of its time to the performance of new music. Since 1970 he has taught at Wesleyan University.

In 1966, along with Robert Ashley, David Behrman and Gordon Mumma, Lucier founded the Sonic Arts Union, for whose concerts he developed numerous live electronic works, exploring echolocation, brain waves, room acoustics and the visual representation of sound. His recent works include a series of installations and works for solo instruments, chamber ensembles, and orchestra in which rhythmic patterns and related spatial phenomena are created by close tunings.

In 2001 Lucier’s Ovals for chamber orchestra was performed at Donaueschingen by the Hilversum Radio Orchestra and, in 2002, Just Before Dark was premiered in Vienna by the Soloists of the Tehran Symphony Orchestra. He recently completed Ever Present for flute, saxophone and piano and Almost New York, for flutist Carin Levine. He is currently working on a collaboration with sculptor Alain Kirili for baritone voice and French Horn, commissioned by Thomas Buckner.